This Boom Brake is manufactured by Dutchman (model #BB750) and two sources for it are Defender and Fisheries Supplies. 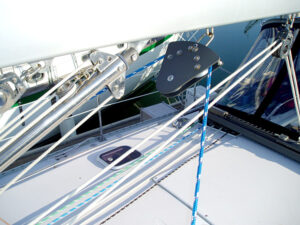 To mount the boom brake I added a boom bail aft of the rigid boomvang. I purchased the bail from Charleston Spars (now Sparcraft), this two piece bail cost about $35. The welded bail, left top of the picture costs about $81. You will need to drill two holes in the boom and tap them with a 1/4-20 tap. If your bails and boom vang bail forward of this are riveted, you will have to drill the rivets out and tap those holes also. I was lucky in that mine already had machine screws. 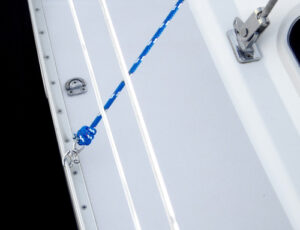 This is the attachment/starting point of the tensioning line. When I first installed the tensioning line I had attached it to the plate with the hole attached to the aft shroud toggle (upper right). The problem with this is I could not get the boom to go as far outboard as I wanted. If I could move the boom brake farther forward on the boom I may have been able to keep the tensioning line inboard. There is just too much stuff forward on my boom with the rigid boom vang and furling main line.

The red lines all point back to the cockpit, the arrows show the line direction when it is being tensioned. 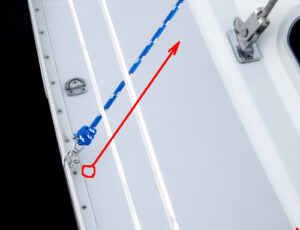 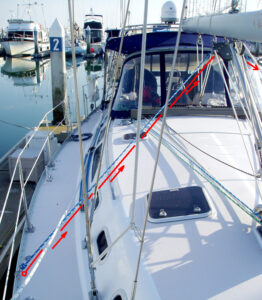 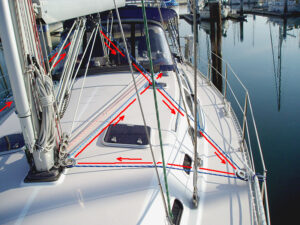 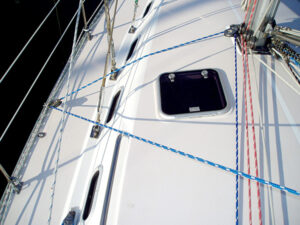 The photos above and below show you the blue boom brake tensioning line as it leads from the brake to the turning block attached to the toe rail then to the block attached to at the base of the mast then back into the cockpit and through a rope clutch. The two blocks are 70 Series from Garhauer Marine. The line is 9/16″, the size of the line contributes to the friction of the brake. The larger the line the more drag, 5/8″ is the largest line recommended for this size brake. I played with the placement of the boom bail by using a piece of line tied around the boom and attached to the brake. 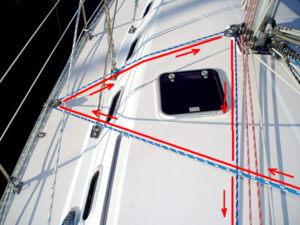 The first time we used the brake downwind in 16 knots on San Francisco Bay, after some tensioning adjustments, it worked great. We can now jibe the boat, never leave the helm nor tend the mainsheet. It would be best to tend the mainsheet so as it comes across the sheet doesn’t hang up on anything but I wanted to know if it I could do it this way. Matter of fact it worked so well we jibed 2-3 times in a row just for the fun of it. If you have any questions contact me at bill [at} martinellistudios.com